Whilst translations do exist in English for Shikshapatri, Vachnamrut and other shastras, their true meaning can be diluted and the true essence lost when translated from Gujarati into English. The same can be said for many of the ancient scriptures such as the Bhagavad Gita; the difference being these scriptures were written in Sanskrit. Sanskrit is one of the world’s ancient languages and many western words have their origins from Sanskrit. 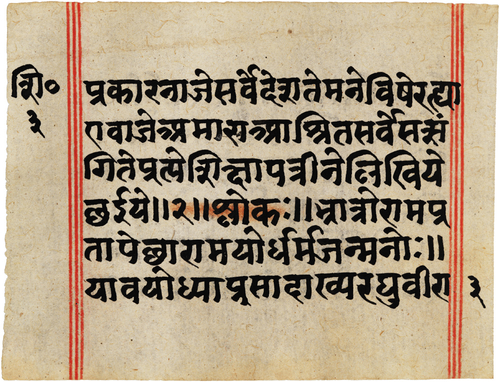 Shikshapatri at the Bodleian Library, University of Oxford 1

Sanskrit classes have been running at the school since 2011. They take place on Saturdays between 5.00pm and 7.00pm. Such is the popularity of Sanskrit classes that we have a full class week in week out. Come and join us if you want to learn; and if you have any doubt of the influence of Sanskrit in modern life then maybe the following quotes will persuade you otherwise:

“Without the study of Sanskrit one cannot become a true Indian and a true learned man."  -- Mahatma Gandhi 1

"If I was asked what is the greatest treasure which India possesses and what is her finest heritage, I would answer unhesitatingly that it is the Sanskrit language and literature and all that it contains. This is a magnificent inheritance and so long as this endures and influences the life of our people, so long will the basic genius of India continue. If our race forgot…the Upanishads and the great epics (Ramayana and Mahabharata), India would cease to be India." -- Jawaharlal Nehru2